Last week's post, "It's Raining Men," was the first of a two-part series on portraiture. Today's title says it all.  As I stated last week, portraits are my favorite form of art, and my largest collection.  My dames are just as dear to me as my men. They have also been selected for their volume of personality and expression, not just their beauty.

I do have a tendency not to hang the men and dames side-by-side.  Do not want procreation.

Out of the gate with a genre of art important to me: "Outsider Art."

Outsider art was coined in 1972 as an English synonym for art brut ("raw art" or "rough art"),  which describes art created outside the boundaries of official culture; particularly art by those on the outside of the established art scene, such as psychiatric hospital patients and children.  The English term "outsider art" is often applied more broadly, to include self-taught or naïve art makers who were never institutionalized. Typically, those labeled as outsider artists have little or no contact with the mainstream art world or art institutions. Often, outsider art illustrates extreme mental states, unconventional ideas, or elaborate fantasy worlds.


It is no wonder that I collect and love Outsider Art. I relate. Connection. 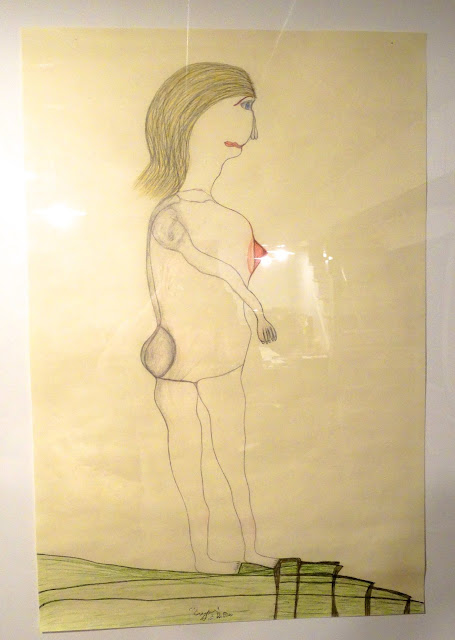 One of my favorite pieces. Pencil and watercolor on paper.  Gerald "Creative" Deprie (1935-1999) was an outsider artist from Kentucky. The themes of his drawings are diverse: flowers, nudes or architectures. He worked fast. When he drew a human figure, he represented it first naked, then added clothes. He was fascinated with nursery rhymes and ancient places, particularly Egypt. A navy veteran, plagued by heart problems, he lived with his dog in a small apartment in West Virginia.  In his handwritten autobiography, he writes (in a very personal style), "When I do drawing I don't know this or if it's sheer fantasy on my part but I am in a polar position when I draw a picture.  I try to perceive myself in somewhat or somehow in a positive-alignment or perfect balance of myself in positioning of my art or in fact anything I do, I try to do in a positive manner." 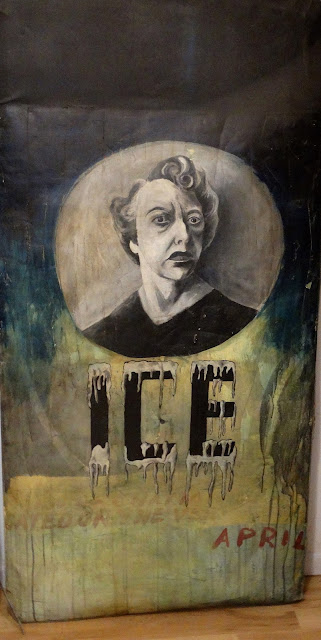 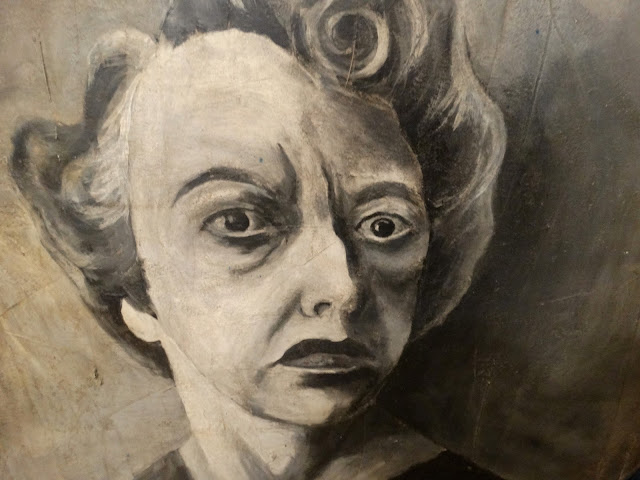 Another Outsider piece, by Kit Keith, isn't actually part of my collection, it is for sale in my shop. Kit used oil on an old mattress. Would love to have this piece in my home, but don't have the space. It is rather large, and as you can tell, she would not play well with others.  Kit calls her "Ice Queen."  She does look a bit frigid. Much unlike Kit.

From Kit's own press release: “Kit Keith grew up the daughter of a father who was a sign painter and a mother who had a deep appreciation of antiques. Her parents’ influence is clearly evident in her work as she paints over thrift store paintings, old magazines, advertisements and other ephemera from the past. She is inspired by 'beautiful illustrations' and a time when 'everything was done by hand' when the convenience of a computer font was unimaginable. Her iconic portraits of elegant, wistful, figures carefully placed on old maps, ledgers and discarded papers are stoic yet emotive with a story behind each one.” 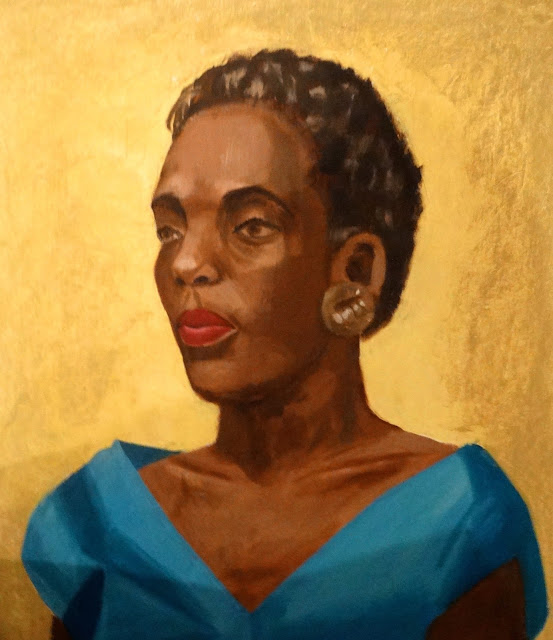 What personality this face shows. Oil on board, dating to the early 1960's. What a sense of fashion, and determined look, this woman has.  Artist unknown, found locally in St. Louis. A must have, keeper. Such heart in this work.  Bold composition.  What a proud statement by the artist in such turbulent times. 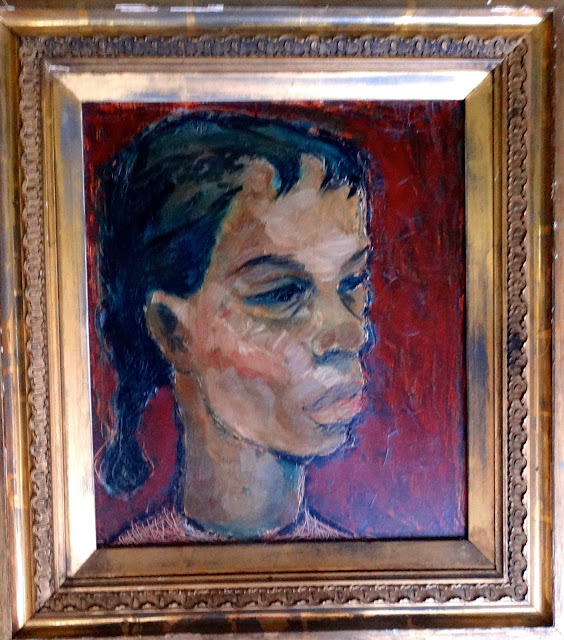 This is by a St. Louis artist, Zale Stratmeyer. 1920-1981. A member of the St. Louis Artist's Guild.  Not a lot of information available on her.  Do see her work around. Oil on canvas, mixed wax using a palette knife, building heavy texture, then scratched off.  Circa 1940's. Such strong features and expression.  A young woman with the maturity of an older soul. Really makes you wonder about her life. She is one of my pet pieces. 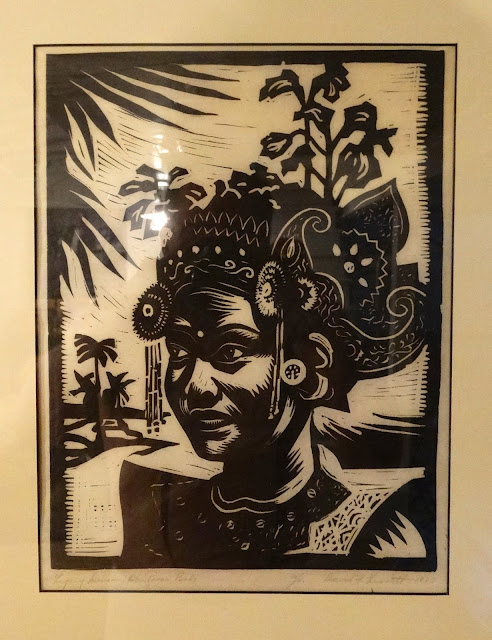 Woodblock print, titled "Bali,"  by David Franklin Leavitt; born in St. Louis in 1897.  Pencil signed, number 10 of 50, dated 1937. David Franklin Leavitt was an artist and muralist of some note in St. Louis and Chicago. He painted the mural "History of Medicine" which was in the A.S. Aloe building in St. Louis, and several other large murals in Chicago. In the mid-1930's he traveled around the world and spent several years in Bali painting. He had shows of his paintings in St. Louis and Chicago in the late 30's. During WWII he developed the dye used to find downed pilots in the water, and several other air/sea rescue aids. He also designed the aircraft insignia (star and bar) which is still in use today on all military aircraft. He died in a US Navy aircraft incident in 1945 when he bailed out over the Chesapeake Bay, and was recovered several days later wrapped in his parachute. At the time he was a Lieutenant Commander in the United States Navy. He is buried in Arlington National Cemetery.  One of my favorite pieces.

When a collector is speaking about a certain piece, it is generally our "Favorite" at that moment. As the conversation moves, "Favorite" moves also. They have a tendency to all be our "Favorite." 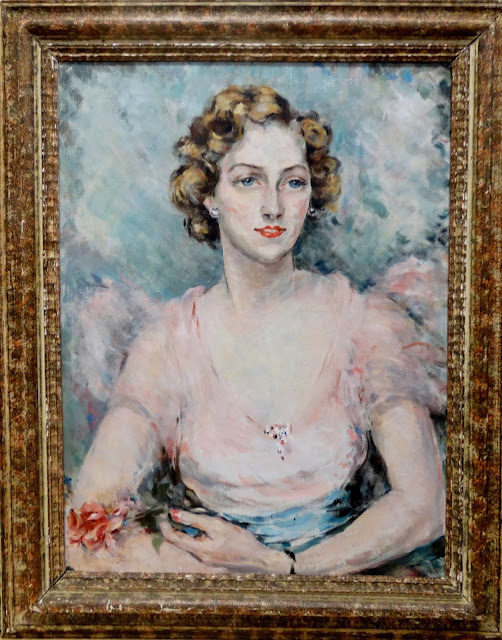 Last dame on the list, Miss Anne Hutton. Painted by English artist Gladys Savie, member of The Society of Portrait Painters. Oil on canvas, beautiful, a tad aristocratic. Available in my shop. 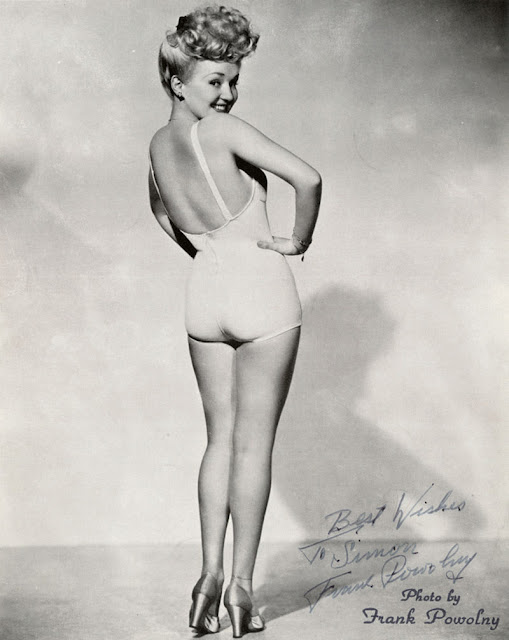 In 1943, Betty Grable collaborated with photographer Frank Powolny for a regular studio photo session. During the shoot, she took several photos in a tight, one-piece bathing suit. One particular pose consisted of Grable's back being to the camera as she playfully smiled looking over her left shoulder. The picture was released as a poster and became the most requested photo for G.I.s stationed overseas. Grable's photograph sold millions of copies, eventually surpassing the popularity of Rita Hayworth's famous 1941 photo. Grable's success as a pin-up girl furthered her career as a mainstream movie star.


"There Ain't Nothing Like a Dame," South Pacific
Posted by ranting of a redneck decorator at 8:30 AM