"A little bit to the left."


How's it hangin': an informal way to say hello to a fellow dude. All it really means is, "how you doin'." 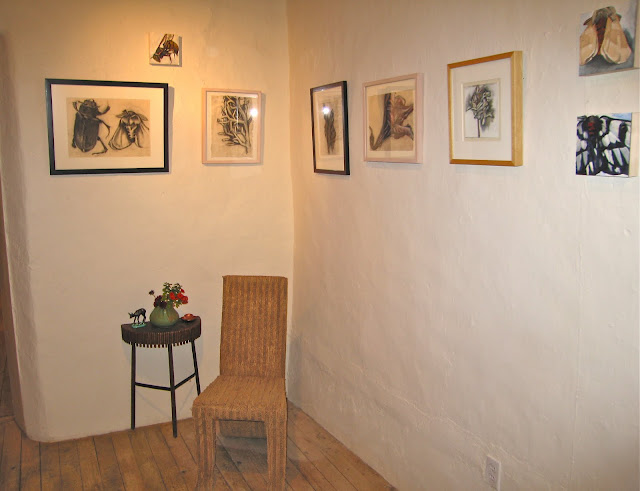 Have you ever walked into someone's home and had to control yourself not to walk over to a piece of art and rehang it? I have.  Look at all the problems in the room above: all lined up in a row, too high, table and chair too small.  Me, hammer, and 45 minutes: I could bring furniture into scale by repositioning the artwork, elongating it, using correct spacing, better mixing sizes and framed/unframed work.  Get rid of that shit on the table.  What difference a lamp would make.

Recruit a helper who can hold pieces against the wall before you begin hammering.  Take a step back to see what the piece is going to look like there.  Get a sense of the proportions and colors, see it against all the other elements.

When hanging a single piece of art, the center of the picture should be about 60 inches off the ground, which places it at eye level.  This is considered "museum height." When done throughout an entire home, it creates a visual line, keeping your eye at a certain height.  And you don't even know it. 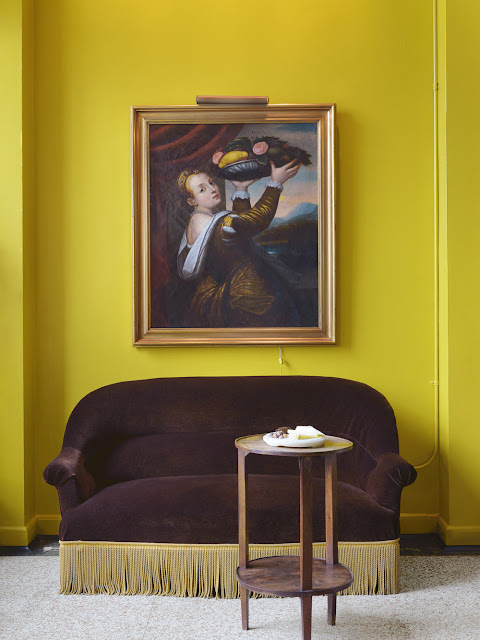 When hanging a grouping of works, treat them as one large picture (whether they're the same or different sizes). Find the center point between them, and use the same 60-inch rule. 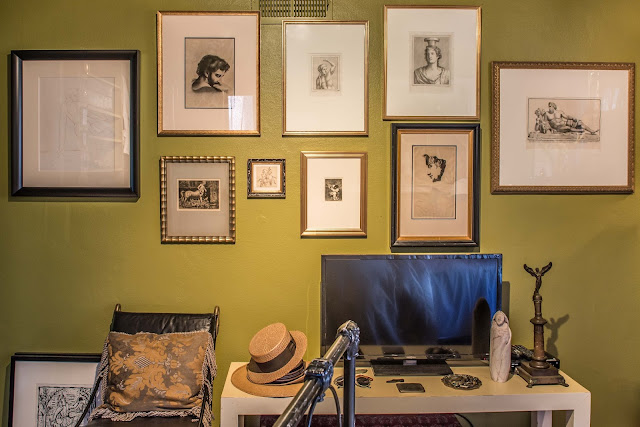 One of my favorite styles of hanging is a series presented in a tight grid, with the frames touching.  Butt-to-butt. Cheek-to-cheek.  This is an extremely complicated hanging, requiring a lot of math. And patience, which I do not have.  I had this professionally hung. 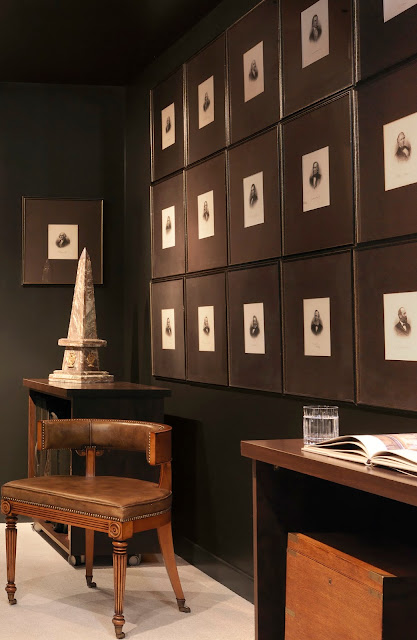 The original Paris Salon exhibited paintings floor-to-ceiling and on every available inch of space. My version of a salon-style hang.  Dramatic, mixing European and American paintings, set against red walls. 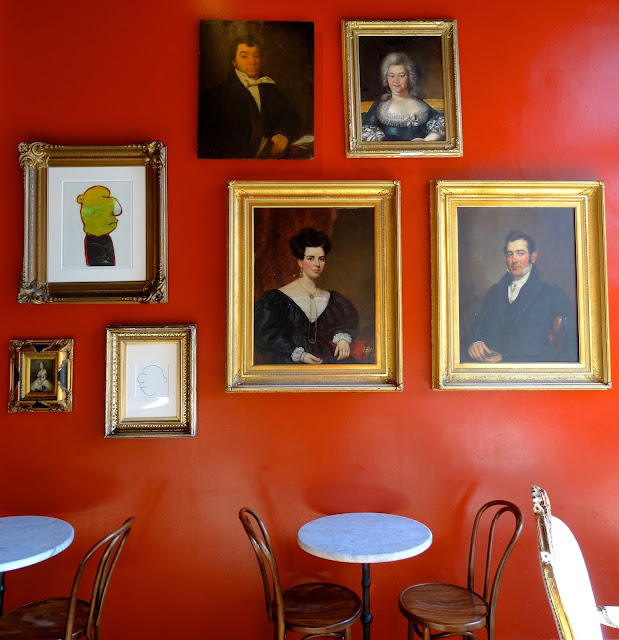 I'm great lover of art. One of the things I enjoy the most is curating and rehanging a client's collection. So enjoy going through a client's home, surveying their art, and giving them new life in different spaces, positioned with pieces that enhance each other.  Repositioning a collection, and hanging properly, can totally give the home a feeling of major alterations (altercations).

Jerry Douglas & The Earls of Leicester, "I Won't Be Hanging Around"

Posted by ranting of a redneck decorator at 2:23 PM No comments:

Pairs – Things That Come in Twos 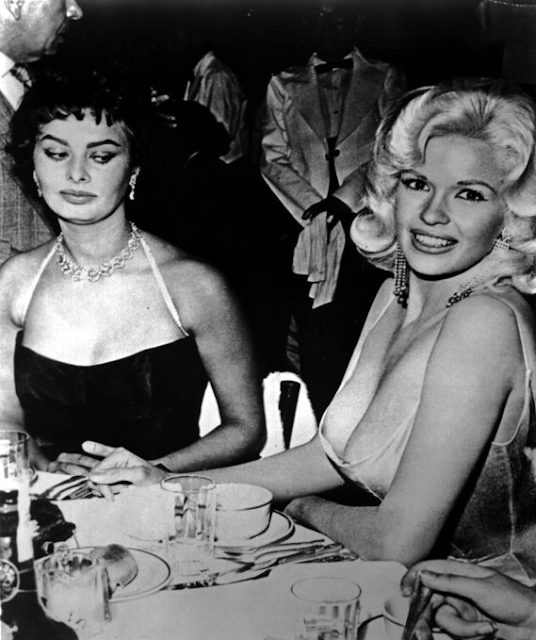 1957 photo of Sophia Loren and Jayne Mansfield at a Beverly Hills party meant to officially welcome Loren to Hollywood. But the Italian bombshell found her spotlight unexpectedly stolen by Mansfield. Loren confirms that, yes, she was thinking exactly what it looks like she was thinking: "Listen. Look at the picture. Where are my eyes? I’m staring at her nipples because I am afraid they are about to come onto my plate. In my face you can see the fear. I’m so frightened that everything in her dress is going to blow—BOOM!—and spill all over the table."

I woulda been staring at 'em too! What a pair of knockers! 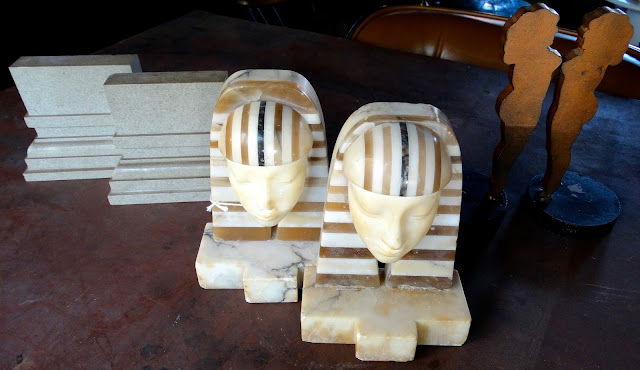 Moving on to less shocking things that come in pairs, I'll start with showing you 3 sets of bookends. From left to right: marble column bases, Egyptian Art Deco, also marble (both available in my shop),  and cut-out iron outsider art by 5¢ Jones (from my personal collection- another pair of breasts).  We all know how to use a pair of bookends. 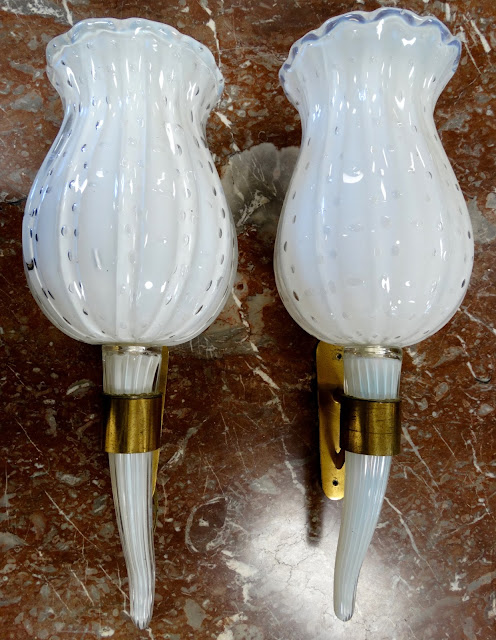 Circa 1950's Murano glass wall sconces.  These could be used in an installation, creating dramatic lighting. Stunning works of art.

Late 19th century English lead garden urns.  These could be used in several different scenarios to make the entrance of your home or garden outstanding. 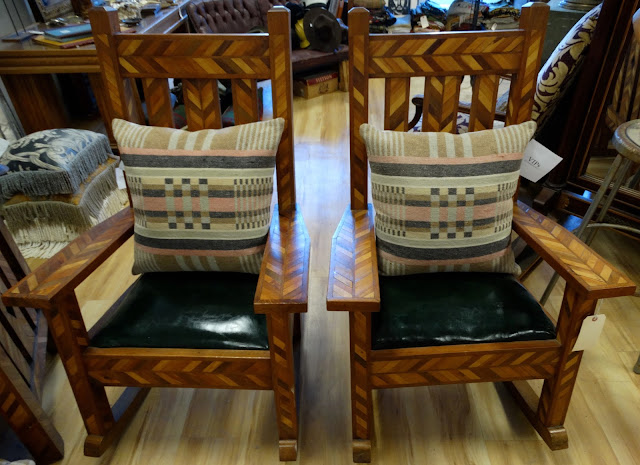 Great pair of folk art marquetry rocking chairs, made in southwest Missouri in the 1940's.  Just in for fall and winter, pillows constructed from 1940's camp blanket. What great additions to scramble up the look of a room.  As you've heard me say many times: "It's all about the dance."


I've always been weird about the use of pairs in my interior design work. I'll not go into a lot of my rules and regulations, because I'm a hypocrite, breaking them all the time.  Just know that a lot of designers get a bit carried away with overuse of pairs, to the point where it seems like they got deals because they bought two.  BORING.

One rule of mine I never break: a pair of lamps MUST go on a pair of tables.  Or be used symmetrically on a long table or sideboard. Other than that, I'm not consistent.  In their favor, pairs seem to have the effect of anchoring a room, especially pairs of chairs.


Asymmetrical: having parts that fail to correspond to one another in shape, size, or arrangement; are not equal or equivalent; lacking symmetry.

People that know me are well aware, I'm a very asymmetrical person. Bet my legs aren't even a matched pair.  I always find ways to balance a room without being matchy-matchy in shapes and sizes, using different sized objects to balance the scales.  I feel it's the unexpected that gives a space a great deal more personality.  Symmetry is so expected. 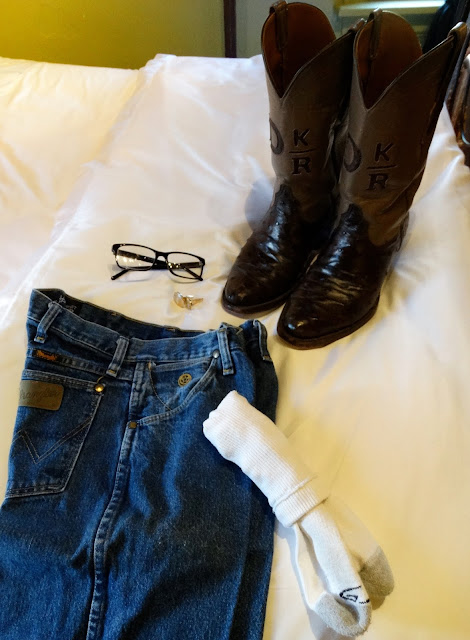 What a hypocrite, all these pairs are on my body today.  Even I need matching boots and symmetrical eyeglasses.  Cufflinks and shoes must be in pairs. 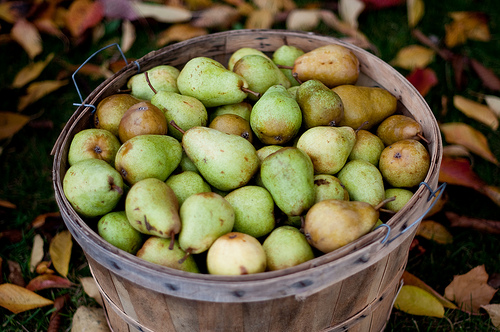 Late summer and fall is the season of the pear.  Just last weekend had the most incredible dessert at Bar Les Freres on Wydown in Clayton (7637 Wydown Blvd, Clayton, MO 63105).  Poached pear with red wine reduction sauce, filled with cinnamon cream.  OMG.  I could have eaten a pair.

Bi: a combining form meaning “twice,” or “two,” used in the formation of compound words.

Bipolar: characterized by both manic and depressive episodes.
Bipolar disorder affects approximately 5.7 million adult Americans, or about 2.6% of the U.S. population age 18 and older every year.

Bilingual: a person fluent in two languages.
The percentage of bilinguals is definitely on the rise. It was 11 percent in 1980, 14 percent in 1990, and close to 20 percent currently.

Please lose 54 seconds of your life to this video.  There was only one Suzanne. Don't be offended.  Suzanne had her limits and opinions, but she was always funny.  Miss the girl.

Buy: obtain in exchange for payment. 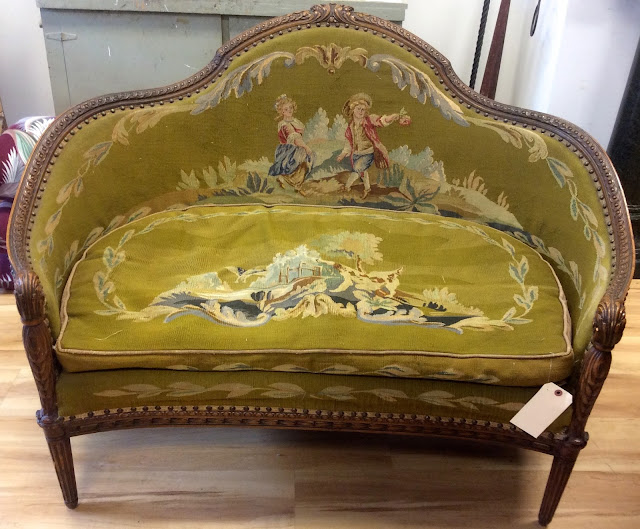 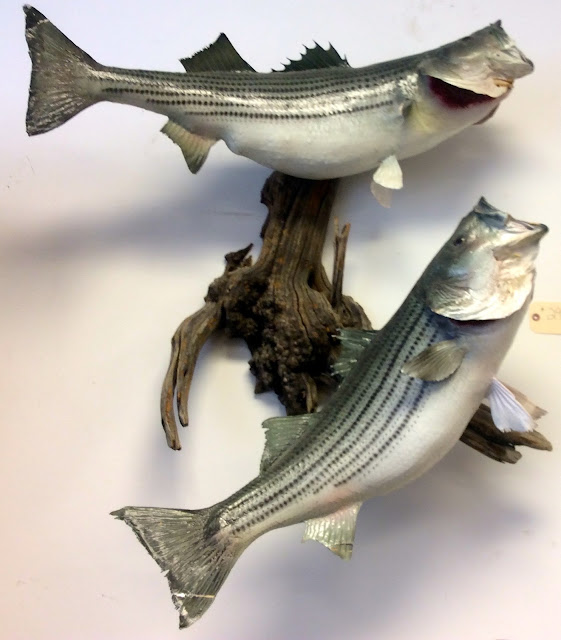 Fish stories. Buy these, hang 'em on your wall, and make up your own story. 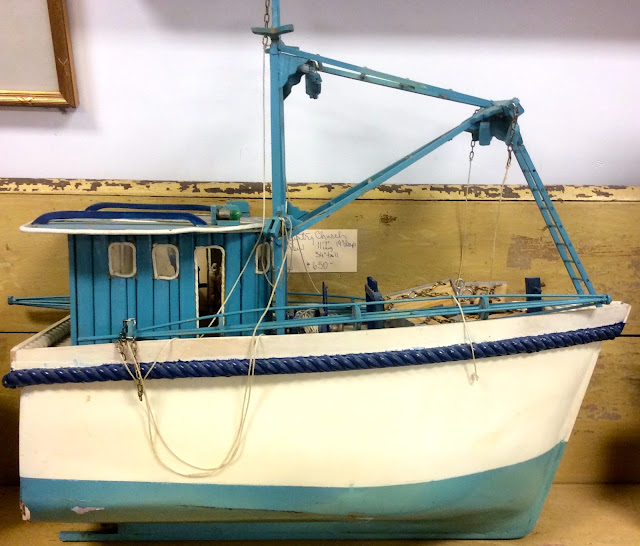 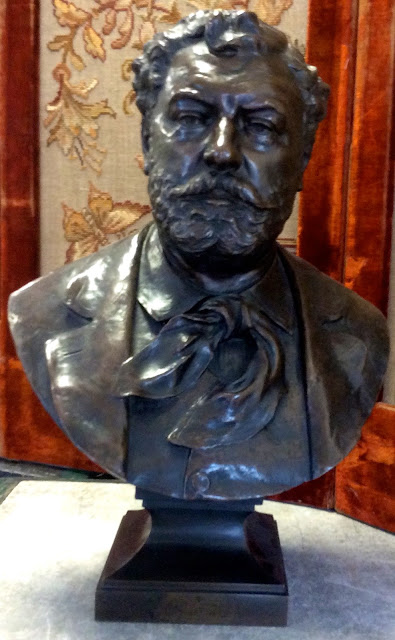 Dated 1879.  Large cast bronze bust.  Anybody know who this dude is?

Merchandise changes weekly.  There's a wide variety of styles and price points.  Please come in for a look around.

Bye: a term used when parting.


Anne Margaret, "Bye Bye Birdie"
Posted by ranting of a redneck decorator at 2:28 PM No comments:

Yesterday 60 knocked at my door.  I opened up and welcomed the new decade.  Left middle age and  entered into the Twilight Zone. Perhaps a ring of fire.

In the 59th year of my life, I serendipitously collected six busts of Dante. What the hell does this mean? How does this parallel with my life?

Dante was an Italian poet and moral philosopher best known for the epic poem The Divine Comedy,  a great work of medieval literature, the most famous part of which is the Inferno, an allegory telling of the journey of Dante through Hell, guided by the Roman poet Virgil. In the poem, Hell is depicted as nine circles of suffering located within the Earth.  Some pretty heavy literature.

Today's focus is on the six I've collected, one for each decade (and also the first six rings of Hell, but we're not gonna get too deep into it, this shit's hard for a Redneck to wrap his head around).  The busts will be shown in order of purchase. 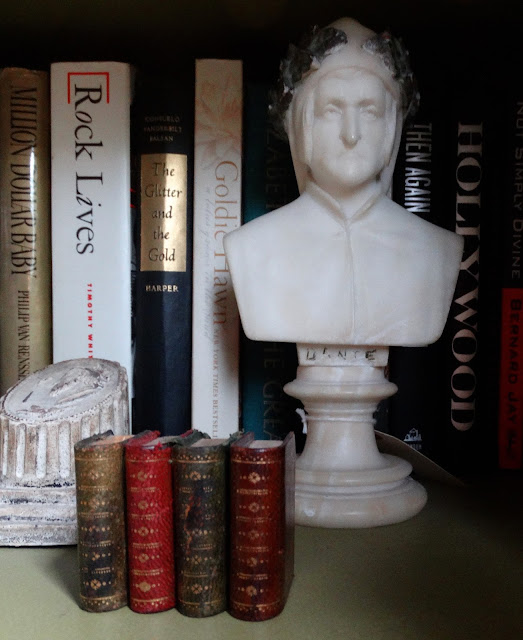 1. Limbo: an uncertain period, awaiting a decision or resolution. Lord have mercy, this is an uncomfortable feeling, one that causes me great anxiety.

This Dante was purchased in one of my fishing holes here in St. Louis and has been set to rest in my library bookcases.  Marble, probably Italian, circa 1920. Picked this first one up because I collect busts, had no idea it would start a Dante collection.  (For more about busts, please refer to post: Bust.)

2. Lust: a very strong feeling of sexual desire.  Hopefully every consenting adult has experienced this.
3. Gluttony: habitual greed or excess in eating.  Guilty as charged, on both accounts.  Especially the eating, over this birthday weekend.  And the gleeful experience of one very pretentious box.

Two of a kind! Not a pair of bookends.  Polychromed cast iron, also resting peacefully (if Dante ever experienced peace) in the library.  The right amount of shitty (paint all chipped up). 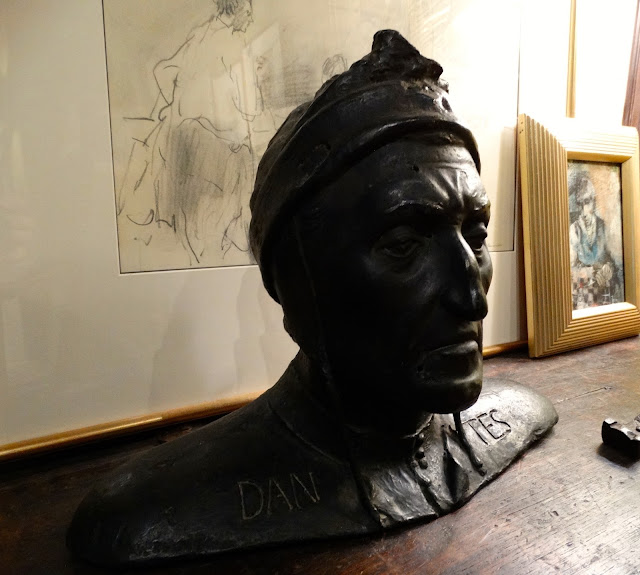 This dude is one of the larger.  Cast bronze, mid-19th century, perhaps a Grand Tour piece.  Setting judgmentally in my entry/gallery/dining room. 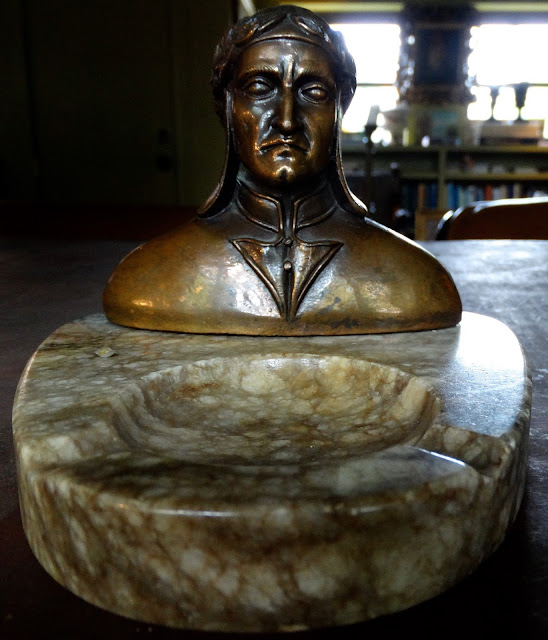 5. Anger: a strong feeling of annoyance, displeasure, or hostility.  Unfortunately I experience this much too often.

This guy is bronze, mounted on a marble ashtray.  Circa 1920.  Interesting, burning cigarettes in a marble ring.  He even looks angry.  Actually, all the busts look angry. 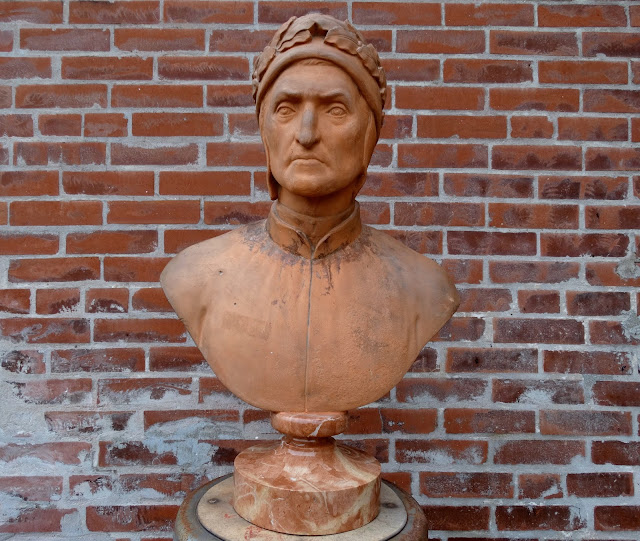 6. Heresy: belief or opinion contrary to the orthodox.  I resemble this remark.

In the last week of my 59th year, I acquired the largest of the collection.  An architectural terra cotta piece mounted on a marble base.  Mid to late 19th century. Not sure if keeping this dude.  Just can't seem to find a place for him to rest.

Life has been good. Woke up today trying to elude limbo, with a lust to give the best I possibly can, gluttonous desire to work harder than I ever have, a greed to enjoy what's in store, an angry commitment to be kinder than I could ever imagine, and a heretical goal to not be so contrary.

The last three rings: Violence, Fraud, and Treachery.  I hope my collection is over, and I don't experience the last three while I'm in the Twilight Zone.

Posted by ranting of a redneck decorator at 12:53 PM 1 comment: