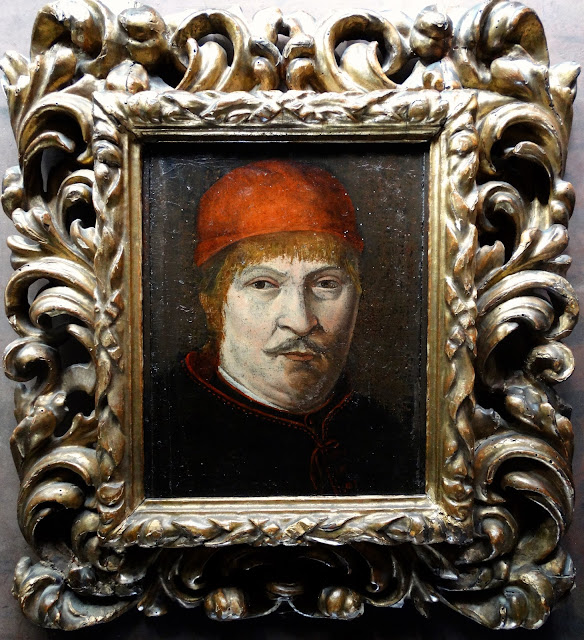 First of a two-part series on portraits.  Portraits are my favorite kind of art, and the largest part of my collection.

Portraits are paintings, photography, sculptures, or other artistic representations of a person, in which the face and its expression is predominant. The intent is to display the likeness, personality, and even the mood of the person. The very reason I'm so in love with them.  Generally my selections are made more for their oddness or extreme portrayal of personality than for beauty.

Most of today's art is by St. Louis-connected artists.  Above, 18th century Italian, oil on board, is not a St. Louis artist, but it is a Cardinal (of a different type). It was purchased here in St. Louis, relatively recently, and immediately became my favorite portrait.  Unsigned, not much information available, but a fucking fabulous frame. Guess I shouldn't use that word when talking about a holy man.  Sure he's passing judgment at this very moment.  Such a pious look. 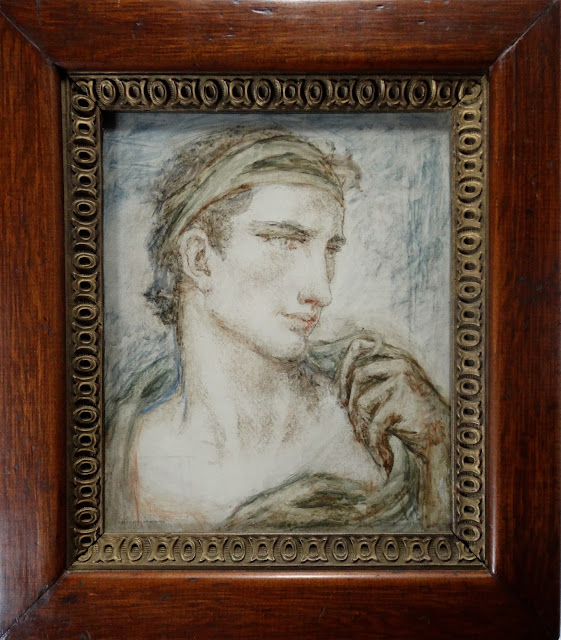 This piece, by Charles Allen Winter, has been in my collection for about 20 years.  Oil on porcelain. First piece I invested in after starting to recover from the financial disaster of being a drunk. A reward to myself for being a good boy. My senses were coming back to me.  Such a handsome fella, with a sense of serenity.  A good emotional investment.

An illustrator and landscape and marine painter who used bright colors and impressionist style, Charles Winter studied at the Cincinnati Art Academy and in Paris. He painted at Gloucester, Massachusetts and St. Louis and exhibited at the Paris Salon and the Art Institute of Chicago, and was an instructor of drawing and painting at the St. Louis School of Fine Arts from 1898-1901. He was married to Alice Beach Winter, also a successful artist. Born 1869, died 1942. 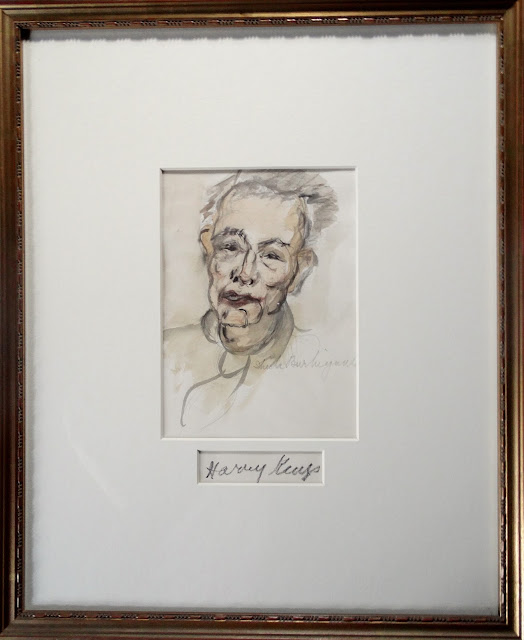 LOVE the look on this fellow's face.  Pencil and watercolor by the artist Sheila Ellsworth Burlingame.  This was a gift from a very dear friend.

Sheila Ellsworth (1894-1969), born in Kansas, married Harry Priest Burlingame and lived in St. Louis for many years.  In 1929 she went London to study.  Harry died in in 1930.  In 1933 she lived in Clayton. When her second husband was killed in WWII, she moved to New York City.  She was a member of the St. Louis Artists' Guild, and her work is still floating around St. Louis.  I'm lucky enough to own several pieces, this is my favorite. 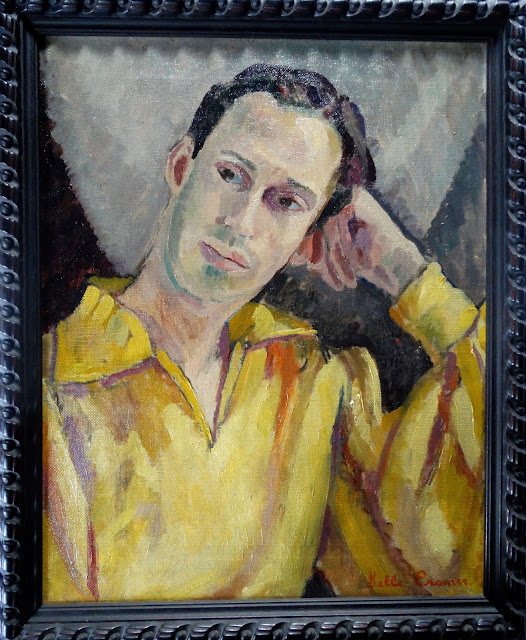 One of two pieces I kept from a series of male dancers.  There's something about this pose, the connection between eyes and hand, that conveys such a strong sense of his contemplation: "where is my craft going?"

Belle Cramer (1883–1978) was born in New York City; in 1906, she moved to Edinburgh, Scotland, where she began her studies at the Edinburgh College of Art. In the early 1920’s, she continued her studies at the Massy Art School in London, and began to show her work with other groups, as well as six solo shows during her time in London. In 1939, Cramer’s husband took a job in St. Louis, MO, where she was to spend the rest of her life. Of the move to St. Louis, Cramer remembered thinking, “‘this is the end of my art.’ (But) I was completely mistaken; it was the beginning of a Renaissance for me.” In 1941, she joined the St. Louis Artists’ Guild as well as Group 15, an artists’ collective with regular exhibitions. That same year, Cramer had her first solo show in St. Louis at the Eleanor Smith Galleries.

Over the course of her long and productive career, Belle Cramer exhibited her work in London, New York, and St. Louis. However, it was in St. Louis that she found her home and her place as an artist. As publisher and friend, Joseph Pullitzer, Jr. described: “the freshness and apparent spontaneity of {her} work do not parade, but rather conceal a virtuosity directed by knowledge and commitment accrued over five decades.”

On her work: “I aim at a strong impact of meaning whether or not realistically stated. Pretty isn’t important, Strong is! I aim at an emotional expression. I aim at complete authenticity. And lastly, I let the color serve as a rich sensuous vehicle. Color is, to me, the great mysterious instrument of painting.” 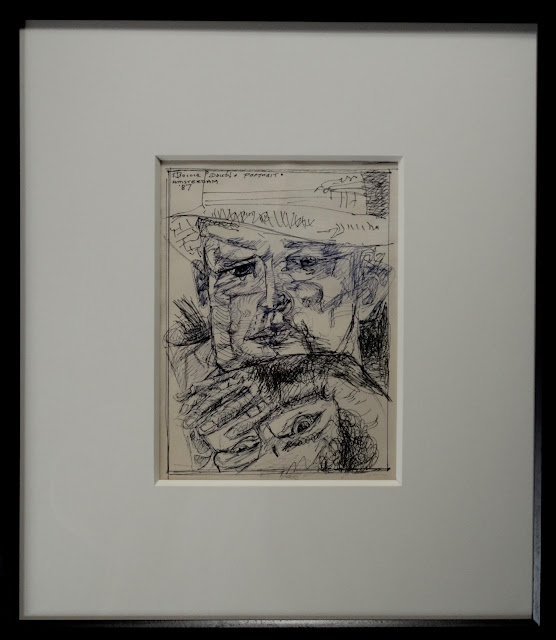 I purchased this piece, part of a collection, from a personal friend of the artist. It is a self-portrait, pen and ink on paper, by Edward Boccia.  Titled "Double Portrait, Amsterdam, '87."  Very interesting how the main image is done in blue ink, the reflection in black.

Boccia was born in Newark, N.J (1921-2012), and studied art at the Pratt Institute in New York.  He became an internationally known painter and a longtime teacher at Washington University whose career took off after he met an arts patron of national renown named Morton D. "Buster" May, head of the May Department Stores Co., which owned the Famous-Barr chain. In so doing, May became the Johnny Appleseed who spread Boccia's work across the country.

Boccia was best known for his large triptychs — three-panel paintings — and polyptychs, many with themes related to Catholic mysticism, and described his work as dealing with "love, lust and life."
Living in St. Louis and working at the Washington University, he said, gave him the security "to paint what I want to paint. I don't paint things that look well over the sofa." 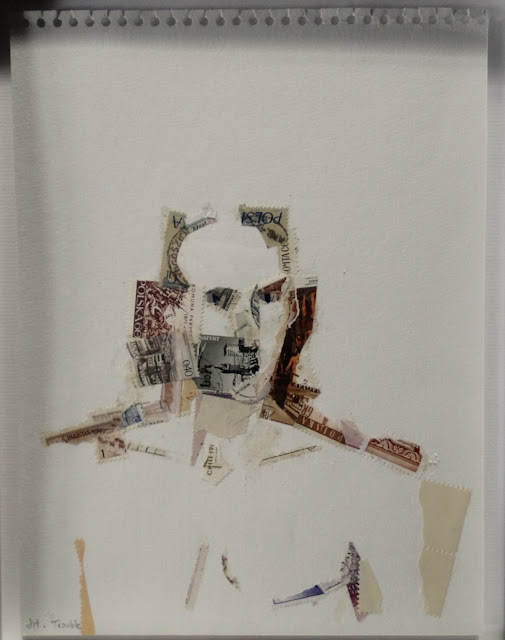 This piece, by Julie Heller, is one of my more recent purchases, titled "Trouble." You'll have to talk to Julie about the name. I thought it looked like trouble. Think it's pretty obvious why I was attracted to it.  Julie is a talented artist with a studio in St. Louis, whose personality is just as colorful as her art. Check out www.julieheller.com 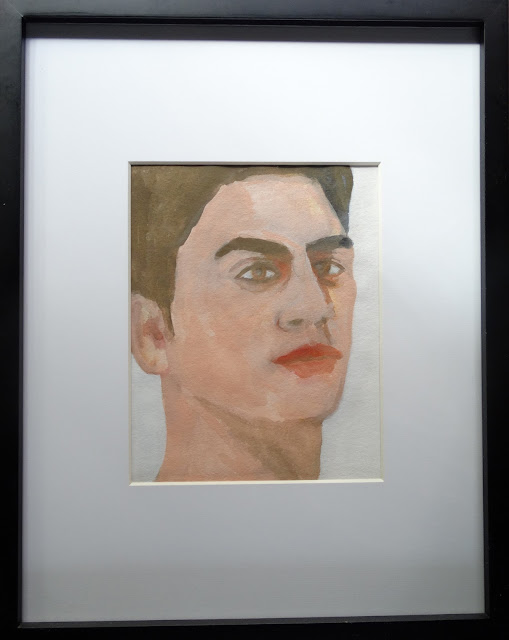 "Ben." Watercolor on paper, by St. Louis artist Belinda Lee. Another recent purchase. Was drawn to this piece because of his strong features. Belinda's work has been shown in St. Louis' most prestigious galleries.  Known for her portraits in several different media and series, she has also taught painting at Washington University. 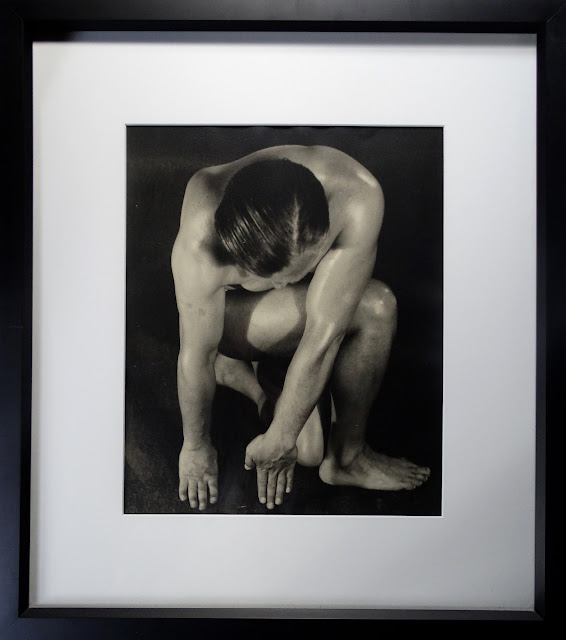 From my collection.  1942, "Nude Study #3," by Jane Edwards.  This photograph was hung in a special exhibition at the Brooklyn Institute of Arts and Sciences, department of photography, Academy of Music building, Brooklyn, New York.  Great, artistic example of beefcake photography. Pieces like this are just not that easy to find. Pretty obvious as to why it's in my collection.

The Weather Girls, "It's Raining Men"
Posted by ranting of a redneck decorator at 2:01 PM